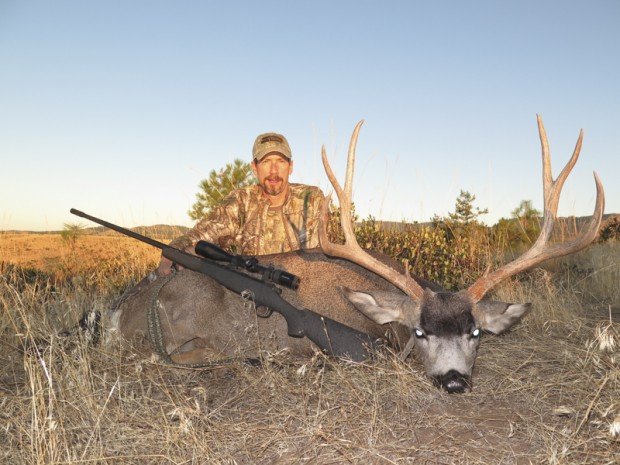 We enjoyed another nice season of mule deer hunting. We always enter each season with high expectations, our ultimate goal is to put a B&C qualifier on the ground. While we know that Oregon is not known for B&C bucks, I promise you that we’ve had them and we’ll continue to have one any given year. However, we are humbly reminded why they are “BOONERS”. We’ve been fortunate enough to put a few on the ground in years past, we’ve also had more than our fair share of heartaches. The reality of the matter is “It Ain’t Easy“, anywhere let alone Mule Deer Hunting in Oregon.

190 inches is what it takes and in Oregon, that is a hard number to achieve, I don’t care when or where you are hunting in the Beaver State. So one has to ask their self is that what Mule deer hunting is all about? Measuring success by a number. I know it isn’t for us and if it is for you, we are not the right fit for you. For us it is so much more, it’s about the fun, don’t get me wrong we want our hunters to harvest a “BOONER” and we want it just as bad as the next guy, but it doesn’t consume us. If we put one on the ground it just adds a little flare, it is the cherry on top of an already delicious sundae.

If it ain’t fun, don’t come. Sounds harsh, brash or down right rude, but it’s the truth and we are okay with that. We are proud of the bucks we produce and the experiences we get to share with those whom have chosen Sarvis Prairie Outfitters for their mule deer hunt.

Take young Steven here with his first Mule deer, he made a great shot at 175 yards, with a .257 Weatherby, I know because I had the pleasure of guiding him. There were 14 bucks in the group, this was not the biggest but it sure was the best, I’ll bet he agrees if you ask him. We could of taken a longer shot, one he wasn’t comfortable with but he chose to get on the sticks and put the smack down on this buck, his buck and when it hit the ground it might as well been the new state record. That’s Mule deer hunting to us, “It Sure Is Fun“.

Hunts – We Simply Got To Enjoy

I could continue, we could continue Mikey, Mr. Wizard, Big John, we’ve all had the conversations that revolve around the number, the size and how it seems to be unfortunately tied to what makes a successful hunt. Hell, we all use it, I catch myself throwing a number out, “mid 170’s” as if we are grocery shopping and sometimes we are, some years with perfect conditions, we can, but it still shouldn’t be only about that. It should be about “The Hunt“, where your at, whom your with, the sights, the smells, the stalk, and if your fortunate enough to find “the one”, that buck that makes you happy. The one you choose to hang that years tag on, well then it’s been a success. 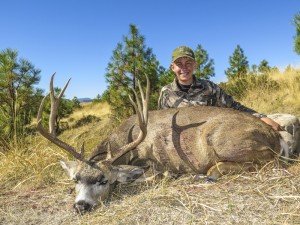 Logan S with his first Mule Deer, taken in 2014. 393 yards with a Lazzeroni Warbird

Bob H. with his 4th Mule Deer taken with SPO, it’s his first with his new Jarrett rifle, we looked over numerous bucks maybe 30+ in a day and half before Bob chose this nice Oregon buck. 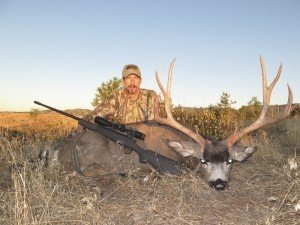 Bob H. at it again with SPO. Putting the Jarrett rifle to work.

Mark H. said that buck will do as we climbed to our vantage point one morning. It didn’t take him but a few minutes to decide this the buck that was gonna claim his tag in 2014. This is also Mark’s 4th buck taken with us. 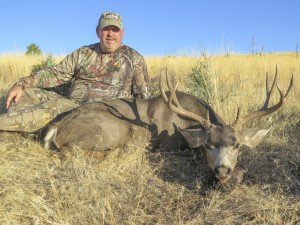 Mark H. with another nice buck with SPO

Shelley C. didn’t hunt in 2013 but was behind the rifle in 2014 and put her new rifle to work on this buck at 378 yards, we had spotted this boy on several of the previous days, never in a spot that we could get to him, we got lucky or he got unlucky, either way she put down a dandy. 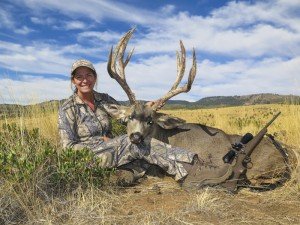 Ben L. is no stranger to killing great bucks, he had a little trouble in 2014 putting the lead in the hair and not in the dirt or the air, but I guarantee he had fun doing it. You can’t help but to have fun when Benny Boy is part of the action, leading the charge or pulling the trigger on the rifle or the release. 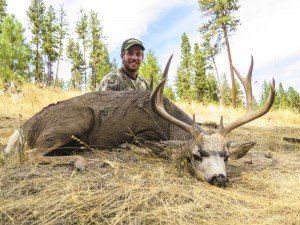 Kara P. put a great stalk on this buck after her and Shelley spotted it in the basin, she too had a little problem getting things sorted out. Still not quite sure why her trusty .270 wasn’t up to the task, dust, wild grass, setting sun or a little hornitis, but in the heat of the moment a perfect shot was followed up by a miss and almost a blown off main beam. It Ain’t Easy, But It Sure Is Fun. 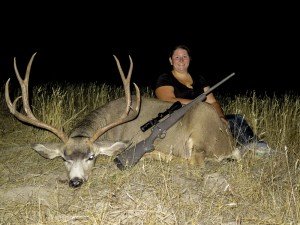 Jenni T. had a great hunt and put a real nice buck on the ground while having fun chasing bucks with Sarvis Prairie Outfitters. This buck was living on one of our lonely ridges. 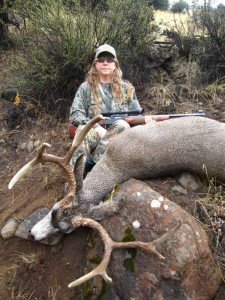 Jenni’s SPO Mule Deer, Pic it where it falls!!!

We didn’t come close to putting a Beaver State buck in the books in 2014, but what we did do was guide some great people to some great bucks and “IT?SURE WAS FUN!!!