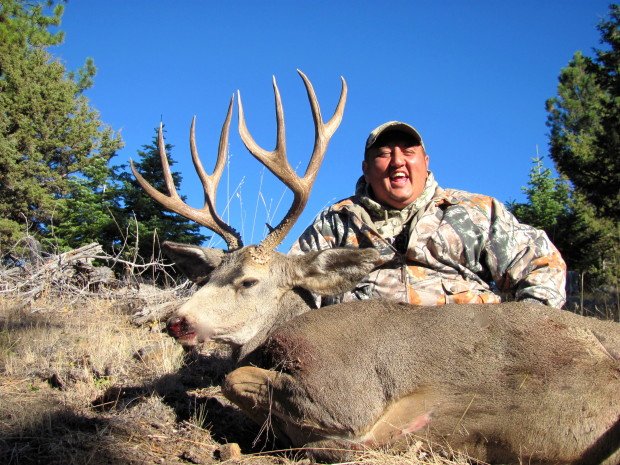 Sarvis Prairie Outfitters continues to be at the top of the list of mule deer destinations for Harry J of Portland, Oregon. Harry returned for his third consecutive year in 2012 to hunt with Sarvis Prairie Outfitters in Central Oregon, he was accompanied by 9 other buddies as they made their annual Mule Deer Buck hunt with SPO. It is a trip they look forward to each year, since first hunting with SPO in 2010. As dry weather and drought conditions affected most of the Western United States it was tough hunting in Wyoming, Nevada, Northern California and most of Oregon, it wasn’t going to be an easy hunt for Harry’s group.

It would be Harry’s group’s past experience with hunting mule deer at Sarvis Prairie Outfitters that kept spirits and expectations high during their 5 day guided rifle mule deer hunt. Knowing what they’ve harvested and what has gotten away on their last couple of trips makes fighting the tough hunting conditions a little more bearable. It wouldn’t be tough on just the hunters during this trip it was extremely tough on their team of guides, as well. As guides your always wanting to get your client on the best animal you can locate during their hunt. We knew what types of bucks were on the property from our preseason scouting and reports from our Archery Elk hunters, but those previous sightings can only be summoned for so long before frustration begins to plant it’s little seed.

The Great Monster Mule Deer of 2010

The competition amongst Harry’s group is second to none; it seems as if no one wants to pull the trigger too soon! But the dry and hot hunting conditions were stalling mid-day hunts and deer activity. Not only is the competition stiff to harvest the biggest buck on any given year’s hunt, but Harry’s group has set the bar at an almost unattainable level with Harry’s 2010 Monster Muley (see photo below). This was a buck that guide Mark Winslow had watched most of the summer in 2010 and as fate would have it he disappeared just prior to the opening of the 2010 hunting season. Our first session of guided buck hunters harvested 8 out of 8 bucks in 2010 but Harry’s buck had eluded us those first 5 days. When Harry’s group of 4 arrived for the second session hunt in 2010, they were newbies to Sarvis Prairie Outfitters and had no idea what was in store over the next 4 days. When Harry’s buck hit the ground on that fall day, little did we know as guides how high the bar was set. Harry’s 2010 Monster Muley was the best we took that year and it continues to be the best through 2012 for their group. The next 4 days produced great bucks and many great opportunities at bucks that slipped away, but all in all they went 4 for 4 that day. 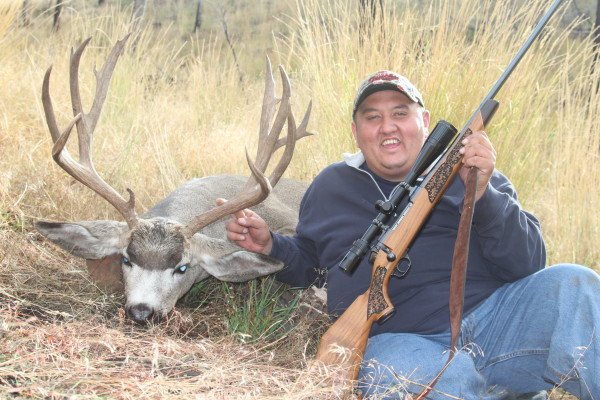 Harry again topped the group with his 2012 Mule Deer Buck a gorgeous 24″ deep forked 4×4 grossing in the mid 160’s B&C, although his group took some impressive bucks, based on pure score Harry holds bragging rights once again. Even through the hot weather and the persistence of their team of guides. Harry’s group left after 3 1/2 days of hunting with a 10 for 10 success rate. Congratulations!!!