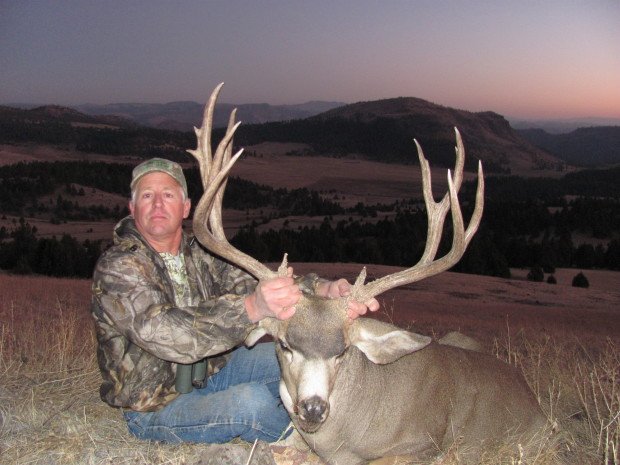 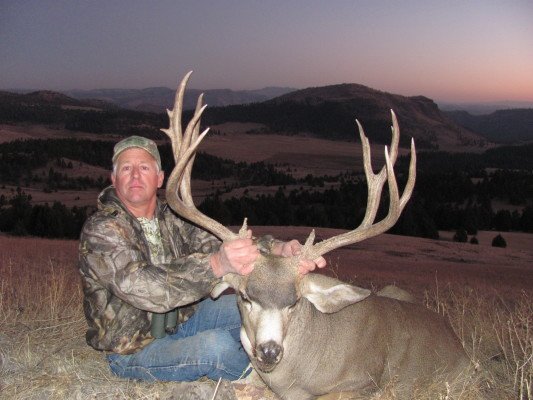 Nothing Less than the Best for Sarvis Prairie Owner

Bryce Logan Owner/Operator of Sarvis Prairie Outfitters very rarely takes anytime to hunt Mule Deer for himself, however on Thursday, October 4 he found a little time to go for an evening hunt. Reports of this Monster Muley as well as 7 other bucks had been reported to us by our Second Session Archery hunters but it wasn’t until Tuesday, October 2 , none of us had been able to confirm the rumors of the bachelor group of bucks. We had all heard the stories of the eight bucks 2 of them over 30 inches with several of the other bucks pushing better than 24 inches wide. All of our guides had checked the area on numerous occasions with our hunters but all of us had come up empty handed, wondering if the stories held any validity. We had taken big bucks from the area in prior years, but it had been several years that it had produced anything other than an average buck.

The Late Bird Gets the Worm

As luck would have it all our hunters were tagged out and departed when the bucks appeared. Big Bucks seem to have that uncanny sixth sense, this group was no exception. They literally showed up exactly where our archery hunters had previously mapped them in early September. The very location we had all pounded and spent endless hours glassing with our hunters. So we looked to Bryce hoping he would agree to hunt a day or two. Of course Bryce wasn’t able to make the hunt with ranch and school commitments the next day or the following morning, but he showed up at the double wide late on the second afternoon ready for an evening hunt.

Accompanied by SPO Guide John Bowman, Bryce set out in search of the bachelor group that called Sheep Mountain home. It wasn’t long before they found a few bucks bedded under the rocks, heck they had even selected a candidate to hang a tag on when out walked this bruiser of a muley and his partner. It didn’t take Bryce long to reassess the situation and their prior selection, once John had located the buck in his spotting scope, it was all up to Bryce to seal the deal. As the bucks fed closer to their position it only took 1 shot from his .270 WSM to anchor this trophy.

It all happened so quickly that the other bucks seem confused, which gave Bryce & John a chance to look over the last 7 bucks, 2 of which were everyday shooters at SPO, 1 is an up and coming monster with double drop tines and the last 4 maybe too good to pass on the 2013 hunt. Of course this buck isn’t 30 inches wide but he is a true trophy in any western state. The tale on the tape for this Central Oregon Mule Deer produces Sarvis Prairie Outfitters with a 27 1/2″ inch wide mid 180’s Boone & Crockett buck. As hunters, we often get far too caught up on width, I myself have fallen victim to the lore. This ladies and gentleman is a Trophy Mule Deer buck anyway you break it down.